A  native of Atlanta, Georgia, Miss Jackson became involved in pageants when her daughter participated in  Miss America Pageant Prelims, and became Miss Kingsport 2004, and Miss Spirit of the South 2006.  She spent countless hours volunteering with her daughter.  Intrigued by the Miss Tennessee America Organization, and what the program provided for her daughter, she became interested in giving back to all pageant systems.  Miss Jackson is a platinum sponsor for the Miss Tennessee America  Organization.

She is the National Executive Director/CEO and Founder of the Miss Spirit of the South, Voice of  Tennessee, Heart of Tennessee, and Motor Speedway National Pageants.  These pageants assists contestants through providing scholarships and paying pageant entry fees to all pageant systems of there choice.  They promote:  INTEGRITY,
CHARACTER, and RESPECT.  She is currently the CEO/Founder
of a pageant consulting business entitled "Queen by Experience Pageant Consulting,"  where she prepares contestants for Interview, Bio/Communication skills, stage presents, walking, wardrobe assistance.  Ms. Jackson gives preparation in the following systems, USA, MAO and the Fairest  Of Fair Pageants.  She is also the President of a non-profit
organization entitled, “Tenacious Teens 4 Christ, Inc.”  Miss Jackson is a Certified Miss America Judge.  As an experienced judge, she has judged several pageants in TN, GA, and
NY.  Miss Jackson is considered an "Interview Guru."  She has volunteered many hours preparing local and state titleholders for their state and national competitions.  No doubt winning is a part of our vocabulary, with her back to back winner's in Teen Tennessee
USA, Top 5 and 15 in the past five years.  Contact info  (jacksonfog@msn.com/615-428-5888)

Miss Jackson is a retired Respiratory Therapist and has a degree in Respiratory Therapy Technology/,Respiratory Institute in Miami, Florida.  Graduating with honors, she received
academic excellence, and is a member of Alpha Beta Kappa National Honors  Society.  Ms. Jackson was nominated for Mentor Proformance at High Tech Institute. She is recognized as one of Cambridge Who’s Who Among Executive and Professional Women.   Miss Jackson enjoys participating in community service events and providing service to others through Pr"I"ncess "4" a Day and Toy "4" a Boy.
​
She has two grown sons, son-in-law Melvin C. Love, and a daughter who was Mrs. Tennessee International  2008, Mrs. Georgia United  States 2011, and is the Current  Mrs. Tennessee United States 2012 Tiffany Love.

MELVIN C. LOVE, Chief Of Operations/Public Relations/Chaplan
Melvin  C.  Love is a native of Tennessee.  No  stranger to Pageants, Mr. Love have  been around pageants since 2005 while training Tiffany Collier in the Talent  and voice performance of Proud Mary, Where she won the 2006 Tennessee MAO 2nd  night preliminary talent competition.

Mr. Love is a highly motivated professional, helping his wife Mrs. Tiffany Love in winning the 2008 Mrs. Tennessee International. This is one of Mr. Love's
proud  moments of crowning his Wife.   Mr. Love also helped prepare his  wife to becoming Mrs. Georgia United States 2011. where she  placed 1st runner-up at the Nationals in Las Vegas.  Mr.  Love also encouraged his wife to write to Mr. Tyler Perry, where she received a part as a (Airline Stewardess in Maida's Witness Protection Movie).   Mr. Love has embraced the covenant Title of
becoming Mr. Tennessee United States 2012.


Mr. Love volunteer's in Miss Tennessee America Organization, and has mentor young  ladies in the studio of (Queen By Experience Pageants Consulting), with {CEO, Mamie Jackson}.  Mr. Love/Mr. Tennessee United States served his
Country Proud, he is a Veteran of  the United States Navy, where he  received his Third Sea service Deployment Ribbon Award, and his first  Expeditionary Medal.
Mr.  Love is a Computer specialist, Certified Phlebotomist/Plasmapheresis, and has a Bachelor Degree in
Christian Counseling.  Mr. Love  has Volunteered on the  Committee of (Operation Stand Down Nashville, INC). He is an ambassador with , and  (Toy "4" a  Boy). Mr. Love is  Chief of Operations/Public Relations for (Miss  National Motor Speedway Organization, and Miss Spirit of the
South Pageants). 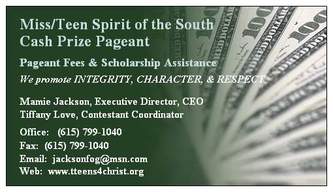 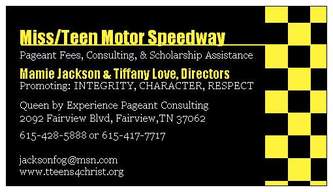 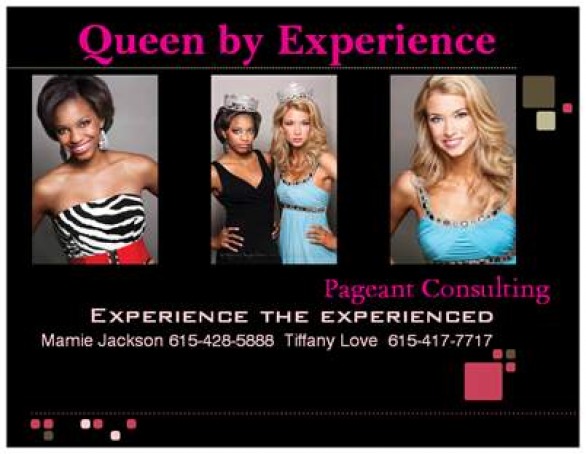